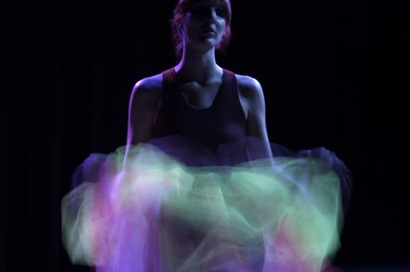 Dr Sarahleigh Castelyn is an educator, researcher, performer, and choreographer; a dance nerd.

I am an educator, researcher, performer, choreographer and writer: a dance nerd. My dance research focuses on race, gender, sexuality, and nation in apartheid and post-apartheid South Africa, the politics of hybridity, and the use of practice as a research methodology.

I have performed in and choreographed dance works, for example at JOMBA! Contemporary Dance Festival (South Africa) and The Playhouse (South Africa). I serve on a number of editorial and organisation boards, such as The South African Dance Journal and HOTFOOT.

I am interested in researching and documenting dance and performance practices that are often marginalised by the global north. I am currently working on a monograph on contemporary dance in South Africa during the early periods after the end of the apartheid regime.

My book aims to explore when and how, and to what effect, the body in South African contemporary dance post-apartheid is a toyi-toying body. Toyi-Toying is a South African dance motif that occurs at protests and is a powerful piece of choreography that creates a charged atmosphere.

My story: I was born in Pietermaritzburg, South Africa in the 1970s, and was sent to ballet at the age of four to cure my duck walk; I had teaspoons thrown at me by my ballet teacher because I wouldn't stop growing; I developed a love for Brenda Fassie and township jive thanks to the wise gogo who cared for me when my mom was working at the hospital; I landed up at the University of KwaZulu-Natal in the 1990s; during the most important election in South African history, I loved dancing the toyi-toyi up and down the voting lines with my fellow South Africans.

I learnt from Paul Datlen that everything was dance, including throwing yourself onto the floor, which I had no problem with, except the getting up. From Lliane Loots, I learnt that not only was everything dance, but dance was political, and dancing bodies are thinking bodies. I danced for Flatfoot when it was 'unofficial', and I takes pride in saying that I remember dancing on the top of a construction site with fiberglass wings on for a photo shoot. I likes to think that the photo in the local Sunday Paper made me famous when I was clubbing in Point Road. During this time, I made other dancers dance with chickens, and got really irritated that there weren't enough books about dance in South Africa on the library bookshelves.

In 2001, I left the sunny shores of the east coast to go to London and landed up completing a practice-based doctoral research project supervised by Jen Harvie at Queen Mary, University of London, which was funded by the United Kingdom's Arts and Humanities and Research Council.

Today, I am a practice-based researcher based at the University of East London but I have one foot in the United Kingdom and one in South Africa - I do have big feet. I love working with my students at UEL and I love working with the student dancers in UKZN (University of KwaZulu-Natal), such as with the Flatfoot Dance Training Company, or even bringing students from UEL together with students from UKZN on Khuluma – the dance writing residency project that is part of JOMBA! Contemporary Dance Festival.

I invite you to join the Dance Revolution: Dance Nerds Unite!

Arrangements are also being made for a collaborative dance project with student dancers from the UK and students from a South African university.

Study dance urban practice with a dynamic and specialist skilled dance team in a great location that is the cultural hub of East London.